I attended the Higher Education Quality Council of Ontario [HEQCO] two-day conference “Re-thinking higher ed Beyond the Buzzwords” last week on November 7 and 8th. The conference made the journey north to Toronto worthwhile; the keynote presentations were outstanding, each provided a unique perspective on the future and potential of higher education, as did the concurrent sessions.

The conference was introspective, forward-thinking, and uncluttered. Acknowledging the buzzwords upfront, putting them on the table had the effect of clearing the air. It felt similar to peeling back the top layers of an onion—allowing participants to get to the core discussions on the issues facing higher ed. 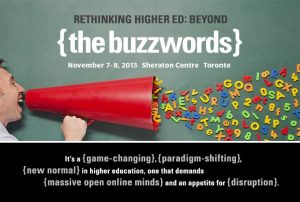 Keynotes of the Conference
The Governor General of Canada, David Johnston, a graduate of Harvard University, long-time educator and supporter of higher education, opened the conference. Another, Dr. David Helfand, physicist and professor of Columbia University described Quest University—an unconventional model for a new liberal arts university based in British Columbia during Thursday’s lunchtime keynote. And Da Hsuan Feng, Senior Vice President, Tsing Hua University delivered a presentation The Ascension of Asia-Pacific Higher Education on the rise and rapid expansion of universities in Asia [which will likely affect Western education institutions in the very near future].

Highlights of Keynotes:
Opening Keynote
Governor Johnston has a deep passion for education; he started as a professor of law, become a dean, then vice-chancellor of McGill University, and finally a president of the University of Waterloo in Canada. Highlights his advice to educators and administrators:
1. Reach out to other educators within and outside the institution
2. To department heads: encourage work and collaboration with outside institutions
3. Reach out to other countries—make connections outside of one’s institution
4. Leverage technologies
5. Create chaos in classroom stimulate students to think beyond the credential

Day One: Lunch Keynote
David Helfand is former president of the American Astronomical Society, an astronomy professor of  Columbia University [currently on leave], and is now the president and vice-chancellor of Quest University—Canada’s first independent, not-for-profit university founded in 2002.

Helfand described how Quest University began, which was with a blank piece of paper. A new model for a 21st century university, created for today’s multi-tasking, connected student.
1. Goal of QuestU: create most engaging undergraduate education
2. Structure: Quest in stark contrast to traditional university—it has no departments, professors are called  tutors—every class sits around a table with a maximum of 21 students. There are no majors.
3. Curriculum: Liberal arts education, all students complete the same 16 courses. Each student picks a question to solve and takes two years to research, analyze  and present the problem as a capstone project that is delivered to a panel in his or her fourth year.  Based on Colorado college, block system. Take courses in a series. Students have one month to explore one subject—are able to delve deep into each topic.

Day Two: Lunch Keynote
Dr. Da Hsuan Feng of National Tsing Hua University gave a compelling talk on the emergence and future of Asian Universities. This talk was quite incredible, requiring a post all its own, though in summary intellectual courage and academic agility were its core themes.

Concurrent sessions were run as panel discussions on topics specific to higher education with selection of individuals to provide a breadth of perspective that included faculty, employers, students and administrators, addressing pressing topics in higher education.

Though the conference presenters and participants were primarily represented by Canadian institutions and organizations, there were a numerous faculty, administrators and journalists from the United States. Though there are cultural differences between Canada and USA’s higher ed systems, viewing challenges from another’s perspective proved to be instructive. Over the next couple of posts I’ll delve into at least two of the themes that may be of interest to readers, though I’ve highlighted key takeaways.

Takeaways:
1. Institutions and its educators will need to be academically agile and intellectually courageous to thrive in the current climate of change and digital chaos.
2. New and innovative models of higher education will emerge in response to the pent-up demand for life-long education.
3. More pathways to alternative forms of higher education will develop, offering accessible and viable options of education for post-secondary students.
4. Education institutions in North America will change in ways yet to be determined as universities in Asia and other parts of the world grow, expand and educate millions of students.